HISTORY OF THE ICON

The origin of this miraculous image is unknown, but a charming legend has prevailed through the ages. It reveals that after the crucifixion, when Our Lady moved to the home of St. John, she took with her a few personal belongings - among which was a table built by the Redeemer in the workshop of St Joseph. When pious virgins of Jerusalem prevailed upon St. Luke to paint a portrait of the Mother of God, it was the top of this table that was used to memorialize her image. While applying his brush and paints, St. Luke listened carefully as the Mother of Jesus spoke of the life of her Son, facts which the Evangelist later recorded in his Gospel.

Legend also tells us that the painting remained in and around Jerusalem until it was discovered by St. Helena in the fourth century. Together with other sacred relics, the painting was transported to Constantinople where her son, Emperor Constantine the Great, erected a church for its enthronement.

The portrait of Mother and Child was revered by the people, but not so by the Saracen tribes who besieged the city. History records that during the seige the senators and citizens carried the precious image in procession through the streets and around the dikes. The Saracens are said to have been frightened by what they saw and fled in dismay.

Later, during the dreadful reign of Emperor Izauryn, who was embittered against holy objects and destroyed many by fire, the image was saved by his wife, the Empress Irene. She displayed remarkable cunning by hiding it in the palace of the Emperor – the very place where Our Lady’s enemies would never think of searching for it.

The portrait remained in Constantinople for 500 years, until it became part of several dowries and eventually found its way to Russia – in a region that later became Poland.

After the portrait came into the possession of Polish prince St. Ladislaus in the fifteenth century, it was installed in a special chamber of his castle at Belz. Soon afterward, when the castle was besieged by the Tartars, an enemy arrow entered the chapel through a window and struck the painting, inflicting a scar on the throat of the Blessed Virgin. The injury remains to this day, despite several attempts through the years to repair it.

Chroniclers tell us that St. Ladislaus determined to save the image from the repeated invasions of the Tartars by taking it to the more secure city of Opala, his birthplace. This journey took him through Czestochowa, where he decided to rest for the night. During this brief pause in their journey, the image was taken to Jasna Gora (meaning “bright hill”). There it was placed in a small wooden church named for the Assumption. The following morning, after the portrait was carefully replaced in its wagon, the horses refused to move. Accepting this as a heavenly sign that the portrait was to remain in Czestochowa, St. Ladislaus had the image solemnly returned to the Church of the Assumption. This occurred on August 26, 1382, a day still observed as the feast day of the painting. Since it was St. Ladislaus’ wish to have the portrait guarded by the holiest of men, he ordered the building of a church and monastery for the Pauline Fathers, who have devoutly ensured the security of their charge for the last six centuries.

Having escaped the rampage of Emperor Izaulyn, and damaged by a Tartar’s arrow in the area of the Blessed Virgin’s throat, the portrait was next placed in peril by the Hussites who embraced extravagant heresies. They invaded the monastery of the Pauline Fathers in 1430 and plundered the richly decorated sanctuary. Among the items stolen was the portrait of Our Lady. After placing it in a wagon, the Hussites proceeded only a short distance before the horses refused to move. Recalling that a similar incident had occurred to Prince Ladislaus some 50 years before – and realizing that the portrait was the cause – the heretics threw it to the ground. It broke into three pieces. One of the robbers drew his sword, struck the image and inflicted two deep gashes. While preparing to inflict a third gash, he fell to the ground and writhed in agony until his death.

The two slashes on the cheek of the Blessed Virgin, together with the previous injury to the throat, have always reappeared – despite repeated attempts to repair them.

The portrait again faced danger in the year 1655. At the time 12,000 Swedes confronted the 300 men who were guarding the sanctuary. Though vastly outnumbered, Our Lady’s defenders were successful in bitterly defeating the enemy. The following year, the Holy Virgin was acclaimed Queen of Poland.

THE ICON IN MORE RECENT TIMES

Closer to our own time, on September 14, 1920, when the Russian army assembled at the River Vistula and prepared to invade Warsaw, the people had recoursed to Our Lady. It is recorded that the following day, the feast of Our Lady of Sorrows, the Russian army quickly withdrew after the image of Our Lady appeared in the clouds over the city. In Polish history this victory is known as the Miracle at the Vistula.

Unlike the Russian army, which failed to take the city, the Germans proved more successful in invading and capturing Poland. After they had claimed the city of Warsaw, one of Hitler’s orders was the suspension of all pilgrimages. In a demonstration of love for Our Lady and their confidence in her protection, a half million Poles secretly journeyed to the sanctuary in defiance of Hitler’s orders. Following the liberation of the nation in 1945, a million and a half people expressed their gratitude to the Madonna by praying before the miraculous image.

Twenty- eight years after the Russians’ first attempt at capturing the city, they successfully took control of the entire nation in 1948. During that year more than 800,000 brave people walked on pilgrimage to the sanctuary on the feast of the Assumption, one of the three feast days of the portrait, even though they passed under the gaze of Communist soldiers who routinely patrolled the streets. Today, the people continue to honor their beloved portrait of the Madonna and Child, especially on August 26, the day that has been reserved for its celebration since the time of Prince Ladisluas.

Because of the dark coloration of the Madonna’s face and hands, the image has been affectionately called the Black Madonna, a phrase reminiscent of the Canticle of Canticles, “I am black but beautiful.” The darkness is ascribed to various conditions, of which its age is primary. During its existence it was hidden for safekeeping in many places which were far from ideal for the storage of works of art; furthermore, countless candles were burned before it, causing it to be almost constantly embraced by smoke. Additionally, it was handled innumerable times, resulting in unintentional abuse.

The miracles attributed to Our Lady of Czestochowa are numerous and spectacular. The original accounts of these cures and miracles are preserved in the archives of the Pauline Fathers at Jasna Gora.

Papal recognition of the miraculous image was made by Pope Clement XI in 1717. Through its canonical coronation the crown given to the image by the Pope was used in the first official coronation of the painting, but this symbol of Our Lady’s queenship, unfortunately, was stolen in 1909. The crown was replaced by one of the gold encrusted with jewels, a gift of Pope Pius X.

Among the most distinguished visitors to the shrine can be counted Jan Casimir, King of Poland, who journeyed there in 1656. After placing his crown at the foot of the Virgin’s altar he vowed, “I, Jan Casimir, King of Poland, take thee as Queen and Patroness of my kingdom; I put my people and my army under your protection…” May 3, the day on which this vow was made, was designated by Pope Pius XI as the feast of Mary under the title “Queen of Poland.”

In modern times, Pope Saint John Paul II, a native son of Poland, prayed before the Madonna during his historic visit in 1979, several months after his election as Pope. The Pope made another visit to Our Lady of Czestochowa in 1983 and again in 1991. The said pope have constantly said that he owes his vocation to the Madonna. He believed she had embraced his life and pontificate over the years, especially through trying moments like the attempt on his life in May 1981.

THE ICON: A SPECIAL GIFT TO TRANSFI

In the middle of August 2013, two Polish priests made a visit to the Transfiguration of Christ Parish. They saw and discovered a beautiful parish community blossoming. They promised to give a gift to the parish as a token of their appreciation for the experience they gained. The parish priest, Fr. Joel Francis Victorino, then asked that the gift be an icon of Our Lady of Czestochowa.

Fr. Lukasz Rygiel, one of the two Polish priests who came, made the arrangements that a replica of the icon of the Madonna be specially made – one that was not just bought from the souvenir shops at Jasna Gora. In this undertaking, he met the prior, Fr. Roman Majewski. It was he who told Fr. Rygiel that the national Shrine of Our Lady of Czestochowa who would prepare the replica and send it as their gift to the parish. 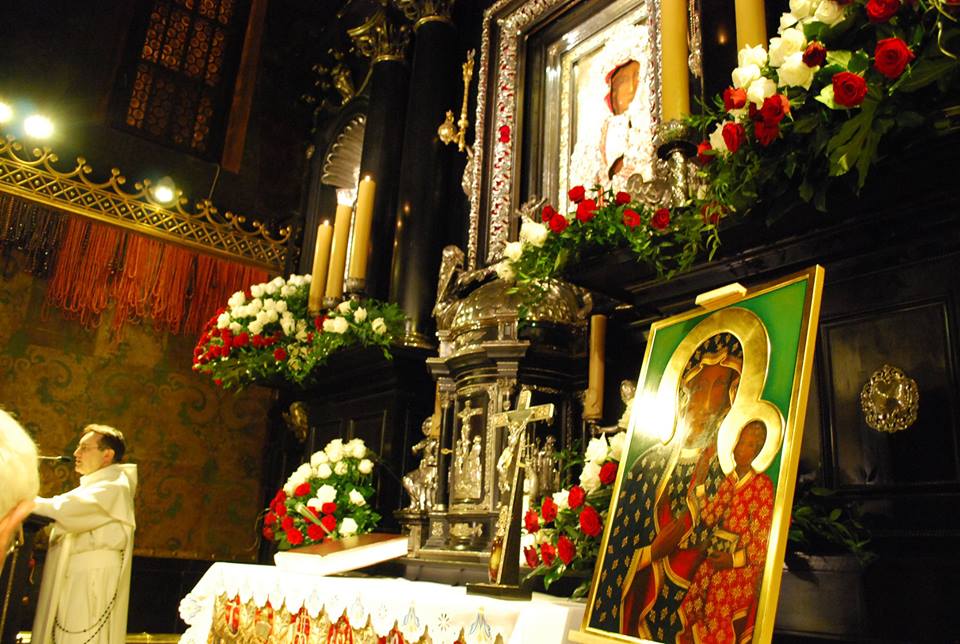 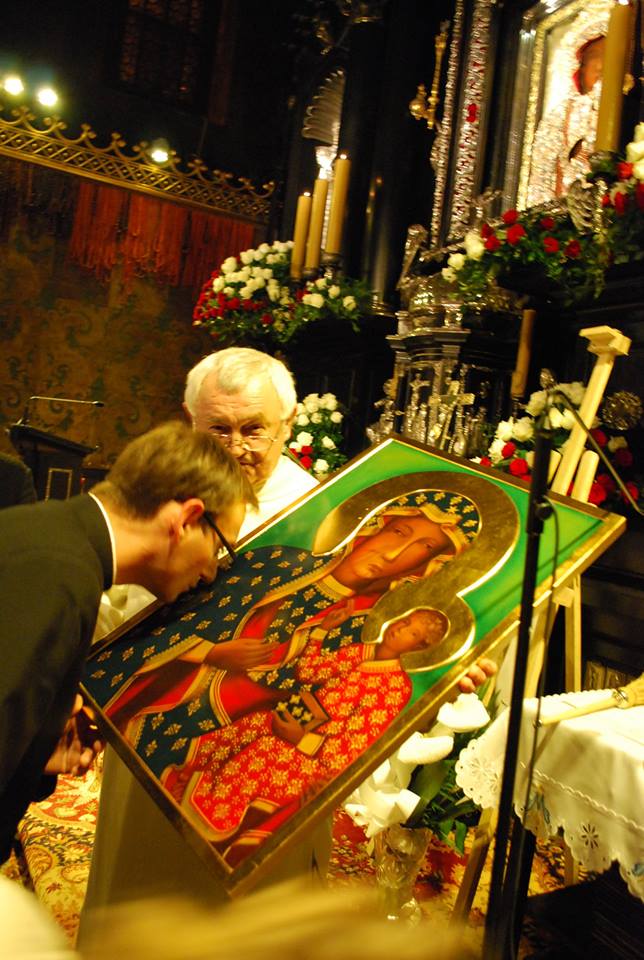 When the commissioned icon was finished, the new prior of the shrine, Fr. Lukasz Buzon (now a bishop) entrusted the icon to Fr. Rygiel to be sent to the Philippines. 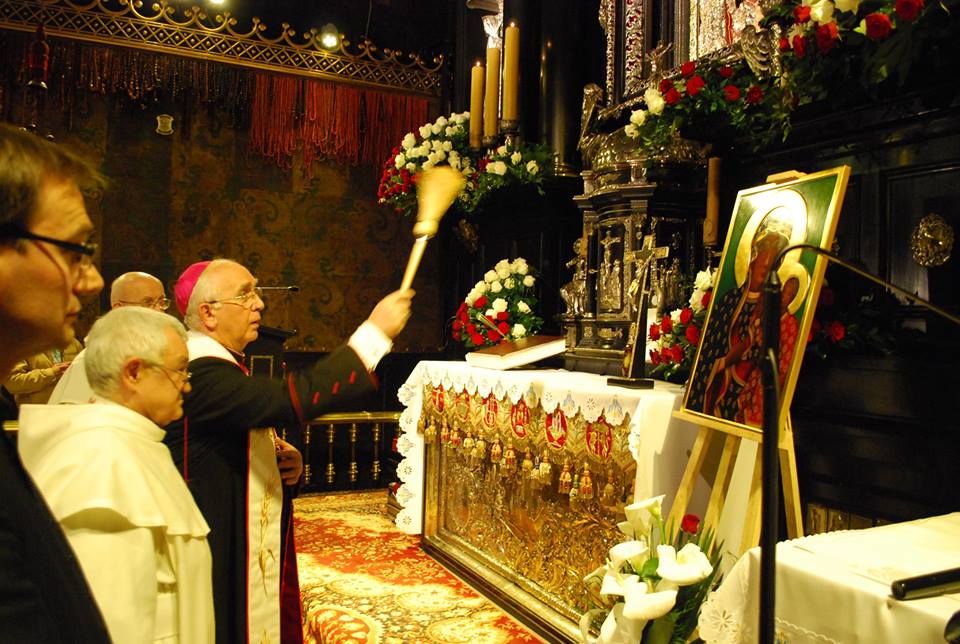 Placed in a secured wooden box, the icon arrived in the Philippines in May 2014. The parish community received it in June 17, 2014. It was then enthroned in the sanctuary area of the parish church of the Transfiguration of Christ. The parish first celebrated her feast day on August 26, 2014 (her feast day in Poland). She is now the special patroness of the Transfiguration of Christ Parish. It is hoped that devotion spread to Our Lady of Czestochowa and the parish may become a permanent shrine to her in the Diocese of Antipolo and in the whole Philippines.

PRAYER TO OUR LADY OF CZESTOCHOWA

Thou art full of grace, goodness and mercy.

I consecrate to Thee

all my thoughts, words and actions, my soul and body.

I beseech Thy blessings and especially prayers

Today, I consecrate myself to Thee,

amid joy and sufferings to obtain for myself and others

Thy blessings on this earth and

Our Lady of Czestochowa,

Mother of the Transfiguration of Christ Parish. 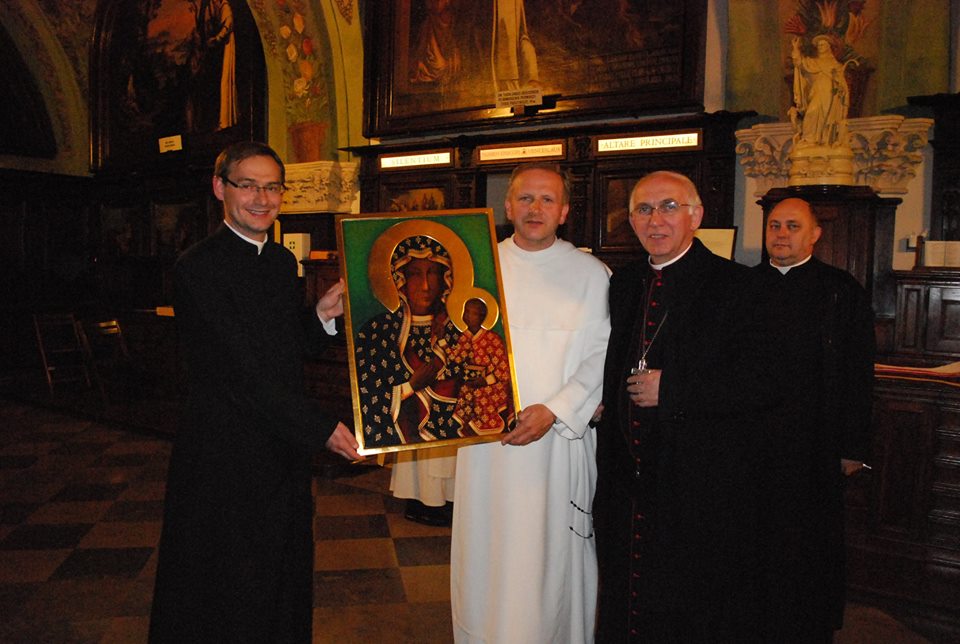